#BringBackOurGirls has become ubiquitous on the internet, with a wide gamut of politicians and celebrities taking up the cause of the nearly 300 Nigerian schoolgirls kidnapped by the terrorist organization Boko Haram. While the efficacy of this sort of hashtag activism, or slacktivism, has been questioned by scholars—and openly mocked by some conservatives—there can be little question that more people are aware of the plight of the captured Nigerian girls than before.

Public awareness is no doubt a good thing, but that alone won’t bring the Nigerian girls back home. This has left many Americans asking what they and their government can do to help. Under public pressure, President Barack Obama has already sent a group of U.S. officials to Nigeria to aid the search. The United States has even sent drones to patrol Northeastern Nigeria, although it’s unclear how useful the unmanned aircraft will be.

But some very influential Americans are calling for more. “If they knew where they were,” Senator John McCain said when discussing the crisis in Nigeria on May 14, 2014, “I certainly would send in U.S. troops to rescue them, in a New York minute, without permission of the host country.” This is a “crime against humanity,” the senator continued, and the United Nations Charter “gives any nation the license if they can stop a crime against humanity.” The United States, McCain is arguing, has both the legal and moral power to intervene in Nigeria in order to find the missing children.

The United Nations Charter actually doesn’t provide that kind of unilateral authority. After all, the words “crime against humanity” are nowhere to be found in the document, and it is unclear whether appealing to human rights, or the even vaguer notion of dignity, would win him any more supporters on the side of unilaterally involving the American military in Nigeria.

Still,  the senator raises an important issue: the historical relationship between state sovereignty and humanitarian intervention. The concept of state sovereignty was codified into international law at the end of the Thirty Years’ War. By creating a system in which states agreed not to interfere in the internal affairs of other states, the Westphalian Peace acted as a humanitarian safeguard. In addition to ending countless years of religious wars, it provided protection to the citizens and subjects of sovereign states.

But Senator McCain’s understanding of sovereignty and humanitarian intervention in Nigeria is a product of a much more recent past. It was during another conflict in Nigeria—the Nigerian Civil War—that the moral and legal framework for violating state sovereignty in the name of humanitarian relief came to the forefront of international politics.

The Nigerian Civil War was a thirty-month struggle that became famous, or perhaps infamous, in the summer of 1968 because of the images of starving women and children and the concomitant accusation that the Nigerian government was committing genocide against the people living in the secessionist state of Biafra. As in the current situation unfolding in northeastern Nigeria, many Americans saw those pictures and asked how they could help  people living half a world away. Their efforts were stymied, however, because both sides of the war wanted to control the relief effort — in effect to claim sovereignty over humanitarian aid — which meant that large stock piles of food never reached the neediest until the war ended in January 1970. 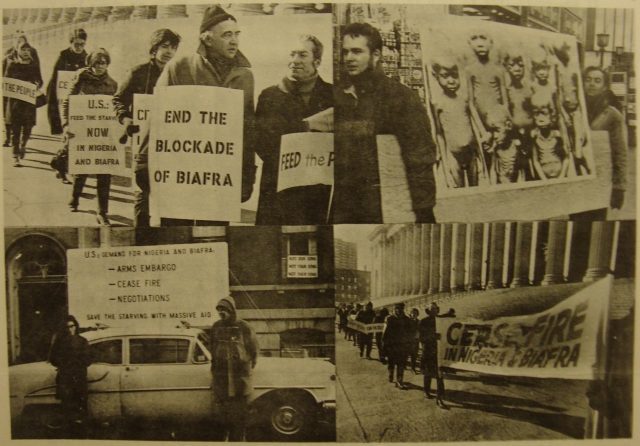 The historical comparisons between the Nigerian Civil war and the present crisis are of course not exact. No one, for example, discussed placing American boots on the ground during the Nigerian Civil War and the conditions that created the civil war were different than the present problems. We can nonetheless draw three broad parallels about how Americans viewed themselves in relationship to humanitarian intervention then and now.

The first is that state sovereignty has become largely viewed as an impediment to humanitarianism rather than a fulfillment of a humanitarian promise. During the Nigerian Civil War, with relief at an impasse, Americans founded over 200 non-governmental and voluntary organizations that pressured the United States government to intervene. Like many other groups, the American Committee to Keep Biafra Alive argued that the United States had a right to intervene in the civil war. In September 1968, committee members presented a brief to State Department officials that argued the violation of sovereignty had a long legal tradition that could be invoked in the case of the Nigerian Civil War. In the end, however, the committee offered not a legal justification for humanitarian intervention but a moral one: “If we cannot perfect, as a minimum, a system of humanitarian intervention, we have lost our humanity. If we sit passively by while the [Biafrans] suffer genocide, we have forfeited our right to regain it.”

This might sound good, but then as now American leaders were skeptical about how this would work in practice. Even if we all agreed that in certain cases sovereignty should be violated for humanitarian relief, who makes that determination? Individual governments? Surely not. The United Nations? Maybe, but even then the violation of sovereignty for the noblest of purposes would be a tough sell to the international community, especially to the developing world who for centuries had been victims of European imperialism. In the 1960s, U.S. officials dismissed the idea of humanitarian intervention in the Nigerian Civil War precisely because it would set an uncontrollable precedent. “One requires no Calvinist predilections to see that governments are not essentially good enough to be trusted with a rule which allows them to exercise force against another country when they believe it would serve the ends of human rights to do so,” one State Department representative said. Senator McCain, for his part, said “I wouldn’t be waiting for some kind of permission from some guy named Goodluck Jonathan,” referring to the current Nigerian president, before sending American troops. There is no doubt that President Obama would receive President Jonathan’s permission before the United States does anything more in Nigeria. 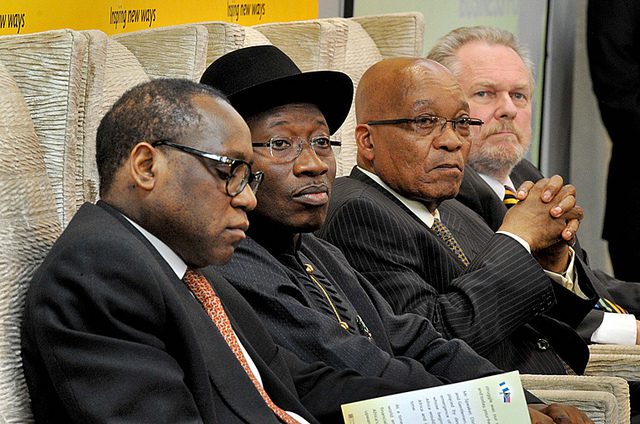 The second conclusion builds on the first, which is the unquestioned assumption that American humanitarian intervention has a long past and is always welcomed. During the Nigerian Civil War, Senator Edward Kennedy demanded that President Lyndon Johnson create a special coordinator to facilitate relief in Nigeria. Kennedy offered the examples of two Herberts, Hoover and Lehman, as Americans who had gone to Europe and had broken through diplomatic logjams to feed starving people. “The United States has always found a way to make its weight felt in the affairs of others when our political self-interest and national security have been at stake,” Kennedy wrote to the president. “In the historic tradition of our nation, I would also hope that we can still exert our powerful influence when great human tragedy strikes our fellow man.”

There is little doubt that McCain feels the same way today about finding the kidnapped girls as Kennedy did about using American resources and manpower to save lives in Biafra. “I would not be involved in the niceties of getting the Nigerian government to agree,” McCain said, “because if we did rescue these people, there would be nothing but gratitude from the Nigerian government.” Yet in the 1960s, Roger Morris, a staff member on the National Security Council, warned against this type of thinking. “Here I think we have to remind [Kennedy] once more that black post-colonial Nigeria is not white post-war Europe.” In the era of decolonization, Morris said, Nigerians “regard the Hoovers and Lehmans as unwanted alien intruders, rather than angels of mercy.” American-led humanitarianism, regardless of motive, undermines the authority of governments and wasn’t welcomed during the Nigerian Civil War. It certainly wouldn’t be welcomed today in the way that Senator McCain believes.

Finally, McCain’s response to the kidnapped girls demonstrates the historical link between modern neo-conservative foreign policy and the liberal moral foreign policy reawakening that occurred during the 1960s. Supporters of humanitarianism in Biafra—liberals being the most prominent and vocal—claimed that a vision of morality should infuse and guide American foreign policy. Norman Cousins, editor of the Saturday Review, said that for too long the United States misplaced its priorities in pursuit of winning the Cold War. “Why is the national interest so often associated with power plays and not with those great thrusts of the moral imagination that in then end determine a people’s place in history?” Cousins asked. Indeed, humanitarianism during the Nigerian Civil War was not just a guiding light for the future but a way of atoning for the Cold War sins of the past.

While McCain doesn’t explicitly mention morality and American foreign policy in relation to the current Nigerian situation, we can see how his opinion has been shaped by a unique, neo-conservative view of the past that has its origins in the 1960s. Whether in Iraq, Syria, or Ukraine, McCain has repeatedly called for the use of American power to enforce moral norms—a “weaponization of human rights” put forward most openly by current U.N. Ambassador Samantha Power. Of course, these ideas have been challenged, and since the wars in Iraq and Afghanistan Americans have been favoring a less interventionist foreign policy. Nevertheless, humanitarianism as a guide for American foreign policy historically emerges during periods when the soul of American foreign policy seems in flux, and in many ways the same conditions that allowed for the emergence of humanitarianism and human rights to become attractive alternatives to the foreign policy status quo during the late 1960s and 1970s have reemerged in the aftermath of the wars Iraq and Afghanistan.

It is still unclear what new alternatives will emerge. Perhaps human rights will again provide a path toward a utopian future. The problem, as I see it, is that appealing to normative legal and moral standards have so far produced mixed results at best. For the United States, however, the greatest factor limiting American foreign policy in enforcing humanitarian and human rights is the gap between its rhetoric and its intentions. Even if we can give Senator McCain the benefit of the doubt and believe that he has nothing but pure and altruistic motives for violating Nigerian sovereignty, the real history of American intervention in the world is one of using moral language and rhetoric to serve its own geopolitical interests. Nigerians would be right to be skeptical of American motives here, especially the kind of unilateral intervention envisaged by Senator McCain. Let’s hope that Nigerians are peacefully able to bring back their own girls. And if the United States does help, let’s hope it’s because President Obama first received the request from President Goodluck Jonathan.

Brian McNeil can be found on twitter, where he posts regularly on international history: @mcneilbriane

Reviews of books about African History here on NEP