On May 31, 1921, Greenwood, a district in Tulsa, Oklahoma crafted by Black business people and professionals, burned to the ground. After a young white girl accused Dick Rowland, a Black elevator attendant, of sexual assault, mobs of white vigilantes attacked this Black community and its citizens for what the white rioters perceived as an injustice against their women. Conservative estimates claim that by the melee’s conclusion some 1,000 homes were destroyed, dozens (if not hundreds) of lives were lost, and a remarkable number of businesses gone. One of the businesses razed in the chaos of the Tulsa Race Massacre was the Tulsa Star—the city’s first Black newspaper, established in Tulsa just seven years earlier. In 1936, E.L. Goodwin, a local Black businessman, bought the rights to the Tulsa Star, renaming it The Oklahoma Eagle.

Intertwined with the story of the The Oklahoma Eagle is my own story. My family moved to Oklahoma when I was an infant, so that my father could attend law school at the University of Tulsa. After graduating in 1999, my father’s first job was as a law clerk at Goodwin & Goodwin, Attorneys at Law. I grew up listening to the stories of Jim Goodwin, the son of E.L. Goodwin, and playing with his beloved Westie aptly named Justice. In the same building where E.L. Goodwin and his staff worked to publish, The Oklahoma Eagle, — at the time the only Black newspaper in the city of Tulsa — my father and Jim Goodwin toiled away at civil rights cases for indigent clients. These efforts to publish the paper were not without struggle. Four years before my father began working at Goodwin & Goodwin, it looked like the Goodwins were going to lose control of The Eagle. 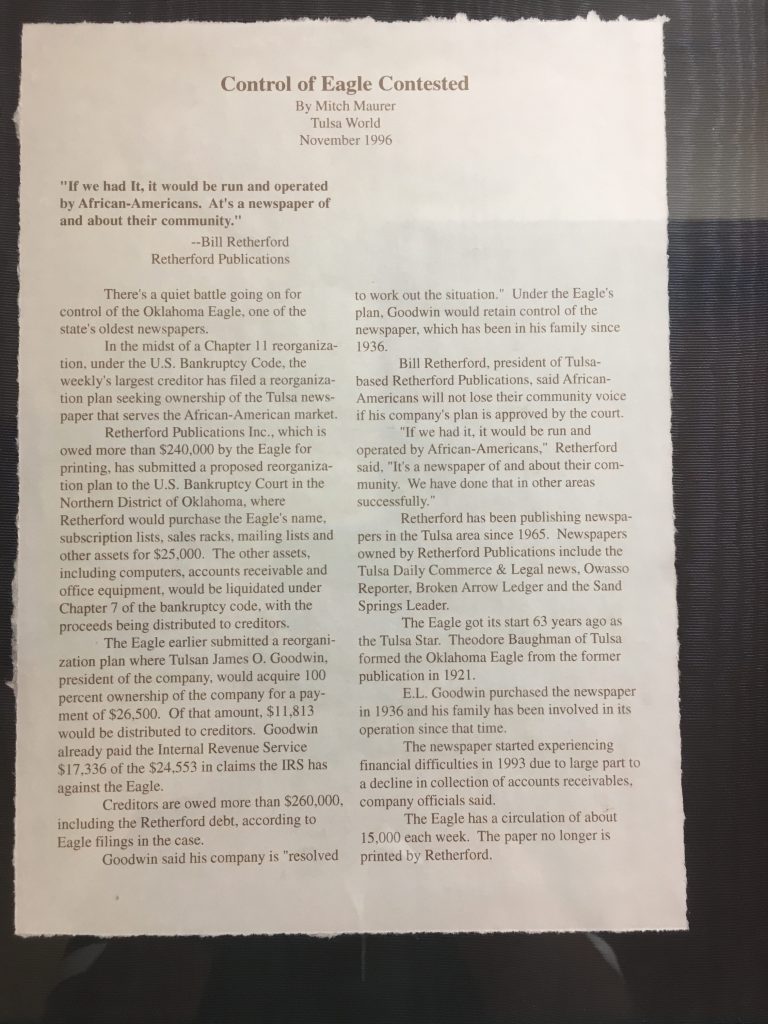 A framed article discussing the Eagle’s financial struggles that hangs on the wall at The Oklahoma Eagle.(via author)

With determination and the support of local benefactors, The Oklahoma Eagle survived these financial struggles. In remembrance of the hard times and the faith that carried them through, the Goodwins constructed a hanging altar of sorts known as the “Wall of Faith,” which sits outside where my father’s office once was. 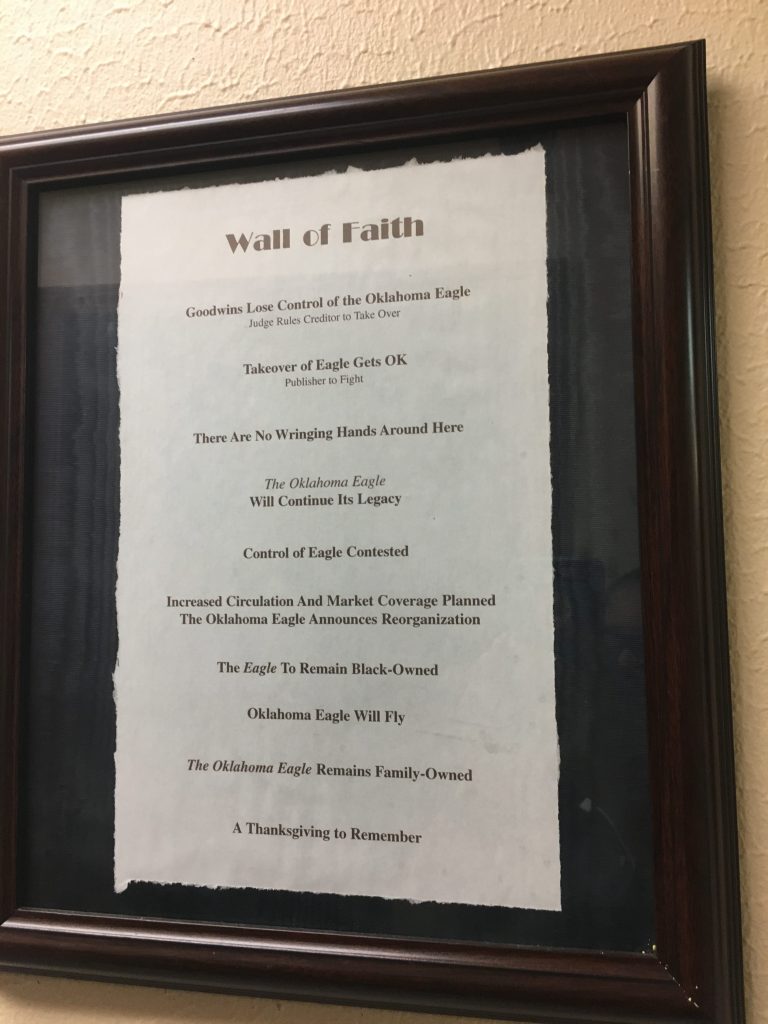 Many years later and after my father went into private practice, I returned to The Oklahoma Eagle in 2016, this time as a staff writer and legal intern with my father’s former partner, Jim Goodwin. Mr. Goodwin assigned me to cover local and national criminal justice matters because of my background in community organizing and newspaper writing with Saint Louis University’s student newspaper, The University News.  That summer I wrote about topics ranging from the police murder of Ollie Brooks to the Orlando Massacre. However, these articles are not available online. As I discovered during my time at The Eagle, the paper lacked the infrastructure to enable digitization of the paper’s archive and current issues. To begin solving this problem, I worked with then-editor Ray Pearcey to create social media and a proper website for the paper. Still, I worried about the paper’s growing archive and how to preserve it. The Tulsa City-County Library had already microfilmed some of the older copies of The Eagle in the 1980s, but the vast majority of the paper’s near 100-year old archive remained either missing or in grave condition. After some quick research, I realized digitization is an expensive endeavor and certainly not one I could accomplish as a rising junior in college. So, I left The Eagle at the end of that summer and returned to school.

Fast forward another few years to the summer of 2019 and I am a graduate student at the University of Texas at Austin. Mr. Goodwin approached me earlier this year and requested I return to The Eagle one last time to complete his dream of digitizing the paper. I had no previous experience with physical archives, much less with digitizing archives, but I have always enjoyed a challenge. When I arrived at The Eagle offices, I was not sure what to expect as I had never before seen the physical volumes of the paper’s archive. The room where the archives rest do not contain the conditions archives typically do such as climate-control, archival boxes, and an ordering system. Rather, the archive room has clear water damage and the papers lay unboxed with the thin protection of trash bags covering those that are not simply left open to the elements. Mr. Goodwin and his family have fought vigorously to keep the paper alive and in the meantime, some upkeep has fallen by the wayside. After seeing the condition of the archive, I knew we needed to act fast and protect this important resource of Black Oklahoma history. 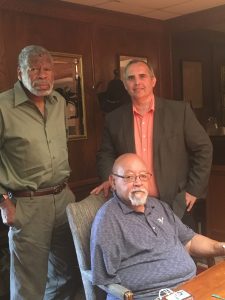 From left to right: Ray Pearcey, former editor of The Eagle, pictured with Jim Goodwin and Chad Williams. (via author)

Immediately, I scoured the internet and consulted my colleagues about how to proceed. Eventually, I located an existing partnership between the University of North Texas and The Oklahoma Historical Society (OHS) to digitize old Oklahoma newspapers. I sent an email to the Director of the OHS’s Newspaper Digitization Program, Chad Williams, proposing we form a partnership. Williams responded enthusiastically and said the OHS had been waiting for The Oklahoma Eagle to approach them. I thought my work had been accomplished just two days into my summer-long stay at the Eagle. This was not the case. I had not anticipated the deeply emotional process necessary for Mr. Goodwin to let go of the paper, his father’s enduring legacy and ultimately, his own. For the remainder of the summer, we debated back and forth about everything, from the expense necessary to digitize the paper ourselves to the changing role of newspapers in society. Indeed, newspapers are a dying form—one more likely to lose than to make money. Mr. Goodwin wanted to find a mechanism for him to sell his archive, produce income to sustain the paper, all while maintaining control of it. Disabusing him of this as a way forward proved to be one of the most difficult tasks of my burgeoning career.

Ultimately, Mr. Goodwin agreed to the OHS’s offer to digitize The Oklahoma Eagle for free while allowing us to maintain copyright privileges. During the process of signing this agreement, we discovered that someone from the paper (this person’s identity is still unknown) had been sending a copy of The Eagle to the OHS for forty years. The OHS, unbeknownst to the paper, had been microfilming issues for all that time. This has made the digitization process much easier than expected. In August, Williams along with a team of researchers gathered the remaining physical volumes of the paper and have begun work to digitize them. They will be returning the physical copies in archival boxes, so that the copies might survive longer. According to the agreement, the digitized version of The Oklahoma Eagle’s archive will be made publicly available on The Gateway To Oklahoma History by 2021, the 100-year anniversary of the Tulsa Race Massacre. As Lead Archivist on the project, I am still working with both The Oklahoma Eagle and the Oklahoma Historical Society to ensure the seamless nature of this partnership. 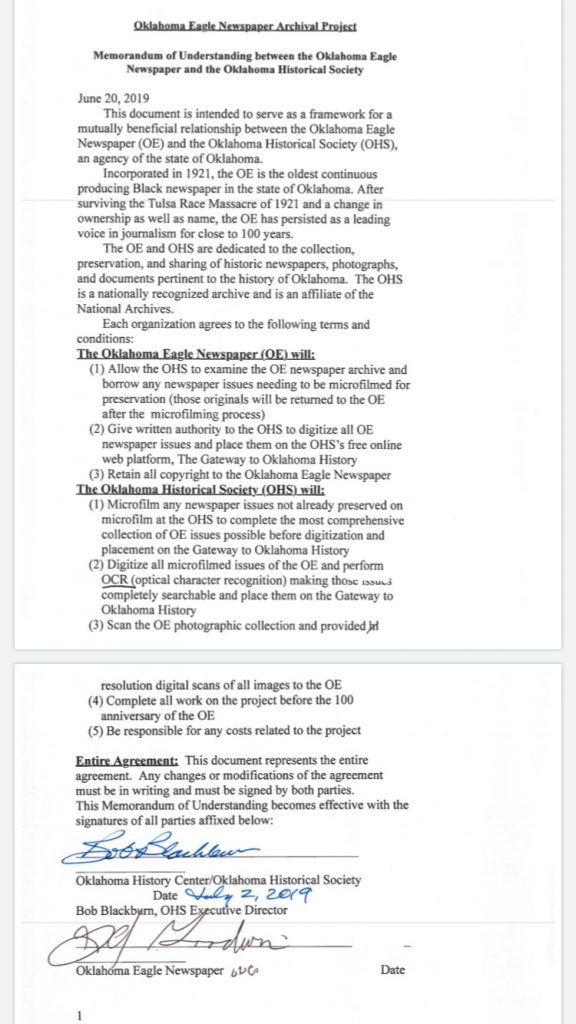 Final agreement between the OHS and The Oklahoma Eagle (via author)

As the Greenwood community prepares for the centennial anniversary of the Race Massacre, the city of Tulsa is finally reckoning with its dark history of displacement and genocide. In 1997, the city of Tulsa first convened a commission to lead an excavation of suspected mass graves containing the bodies of those killed during the Massacre. For political reasons, that search never happened. Now, a second commission has formed and has been tasked with leading the search. This time, however, the Mayor and the Tulsa Police Department have labeled this work a homicide investigation. Working with a team of archaeologists, historians, local activists, and government officials, the Mass Graves Commission hopes to locate the bodies of those deliberately discarded and forgotten. The history of The Oklahoma Eagle and the history of the Race Massacre are part and parcel of one another. Hopefully, as the 100-year anniversary approaches, the work of the Commission and the work of the OHS can meaningfully pay homage to the lives and intellectual history lost to this tragedy. The Oklahoma Eagle stands as a testament to Greenwood’s rich legacy of endurance as the paper quite literally rose from its ashes.

You might also like:
Media and Politics From the Prague Spring Archive
Authorship and Advocacy: The Native American Petitions Dataverse
Remembering the Tex-Son Strike: Legacies of Latina-led Labor Activism in San Antonio, Texas