Tucked into the pages of Nikolai Punin’s diary is a sliver of silver paper made into the shape of a fish. Its scales have been drawn with what appears to be black marker or charcoal in an Impressionist style on one side and in a Cubist style on the other. The fish has two fins along its underside and a pointed tail, most of which have brightly-colored orange tips, and there is a razor-like saw of a fin on its backside. An orange piece of yarn is tied to its mouth as if the fish had been caught with it, making it easy to hang or pull out of a book. The whole object is about the length of a page and, since it was found in a book, one can assume it was made to be used as a bookmark.

Both sides of the fish are decorated in silver and orange (Punin papers, Harry Ransom Center).

The fish was a gift from the famous Soviet avant-garde artist, Vladimir Tatlin, to his friend, the art historian Nikolai Punin. The two men worked together at The Museum of Painterly Culture in Petrograd in the early 1920s just after the Russian Revolution when the diary was written. Punin worked in the Department of General Ideology and Tatlin was producing an experimental play by the poet Velimer Khlebnikov, another friend and collaborator in the circle of Russian revolutionary, avant-garde artists. For Punin, Tatlin represented a particular quality of Russian art that made it surpass the latest Cubist innovations in painting coming from France. In 1921, Punin had already written a polemic entitled, “Tatlin (Against Cubism).” In this short work, he argued that Tatlin made the same innovations in art as the French Cubists, but surpassed them because the tradition of icon painting in Russia gave the Russian avant-garde a particular appreciation of the paint surface. The lack of a Renaissance tradition of perspectivalism, according to Punin, also gave the Russian avant-garde a much freer relationship to space. Punin referred to The Fishmonger, as one of three paintings that represented Tatlin’s start in this direction. In that painting we can see multiple fish that have the silver and orange coloring as the paper fish found in Punin’s diary. Tatlin’s early experiences with church art, painting icons, and copying wall frescoes, was crucial in the development of his style as well as his ideas about the role of art in revolutionary society. The icon was both a work of art and an object for everyday use. This emphasis on the image as everyday object became important in expanding Tatlin’s creative pursuits to include the construction of utilitarian objects to transform the nature of everyday life in the USSR during the transition to socialism. 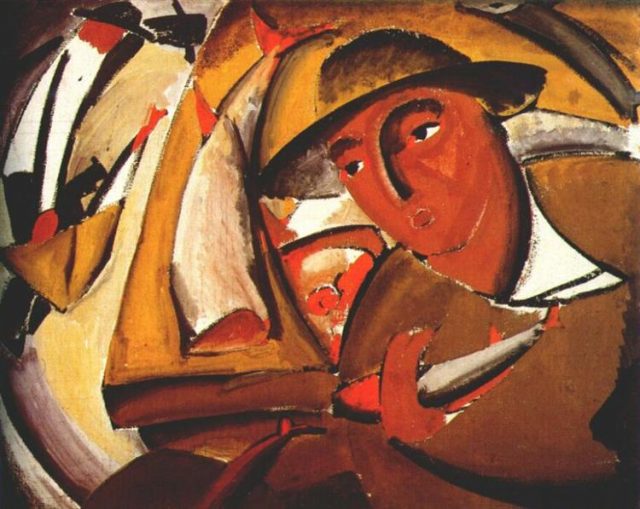 The Fishmonger, by Vladimir Tatlin, 1911 (via Wikiart).

In 1923, Tatlin became the Director of the Section for Material Culture at the Museum of Painterly Culture. During his tenure there, he authored several documents outlining his general program for the role of material culture in the USSR. In an article written under his direction called “The New Way of Life,” he described a series of new projects and prototypes, namely a new design for a coat, and one of five new designs for an oven that could cook and keep food warm for 28 to 30 hours and also keep the home heated economically. Tatlin incorporated the text of “The New Way of Life” into a controversial work of the same name, a photo-montage showing images of the designs that were meant to depict that revolutionary new way of life. He created it for display in the showroom of the Section for Material Culture and the designs were also shown at the Exhibition of Petrograd Artists of All Tendencies. Punin wrote a favorable review of Tatlin’s work in the exhibition, but other critics who believed that art should occupy a place “beyond the realm of the everyday” found the designs inappropriate. Tatlin’s work was revolutionary in that it challenged this traditional boundary between art and the everyday. 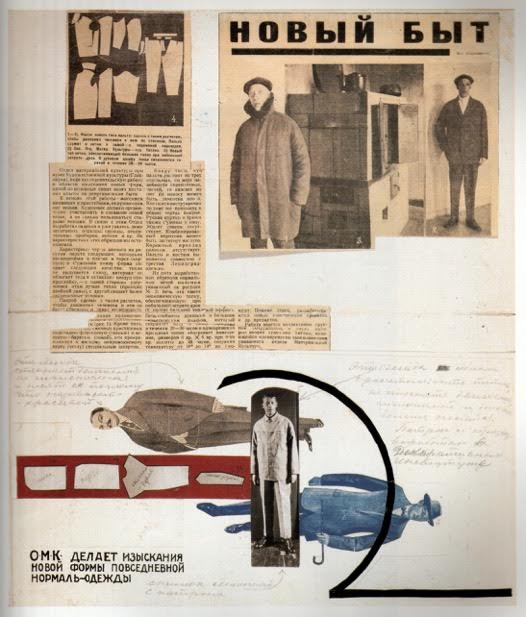 A New Way of Life, by Vladimir Tatlin (via Russian State Archive of Literature and Art).

The fish is an important indication of a close personal and professional relationship between the artist, Vladimir Tatlin, and his admiring critic, Nikolai Punin, and it represents the ways that Tatlin and Punin tried to outline a new revolutionary program for art. It also is an example of that very revolutionary impulse in that it is an object to be contemplated for its aesthetic beauty and also to be used for a utilitarian purpose as a bookmark. Tatlin’s work paved the way for a new interpretation of art as something that could be figurative as well as useful; art in revolutionary society could have a place in the daily lives of every individual and not only in the lofty realm of the art establishment. This little fish offers a window onto the theories of the period of the Russian Revolution, when people sought to rethink the entire Western European model of not only aesthetics but also society.

Rebecca Johnston studies a letter pleading for Nikolai Punin’s release from prison in Policing Art in Early Soviet Russia.
Andrew Straw looks at the evolution of Soviet communism in Debating Bolshevism.
Michel Lee discusses the relationship between Leninism and cultural repression in Louis Althusser on Interpellation, and the Ideological State Apparatus. 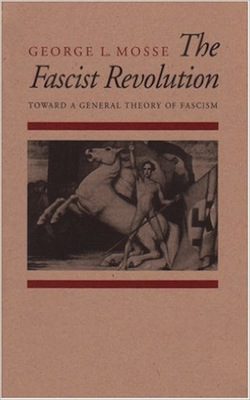 The Fascist Revolution: Toward a Theory of General Fascism, is a collection of essays written over a 35-year period and published in 1999 (the year of author George L. Mosse’s death). It offers not a comprehensive vision of fascist ideology, but a succession of views, each through a different lens: aesthetics, fascism, racism, nationalism, intellectualism, and so on. The resulting analytical kaleidoscope is particularly thought provoking to read against the current upheaval in American politics, especially the rage that has fed the Tea Party and Bundy Ranch supporters and is now buoying up the presidential campaign of populist billionaire Donald Trump.

Today’s political dialogue shares some obvious attributes with Italian Fascism and German National Socialism, such as the celebration of national identity and an embrace of violence, sacrifice, and brutality. The rhetoric of this year’s Republican primary debates has resounded with such themes. But Mosse identifies two other fundamental tenets of fascism—irrationality and revolutionary activism—that are commonly overlooked, and which have suggestive echoes in the current zeitgeist. 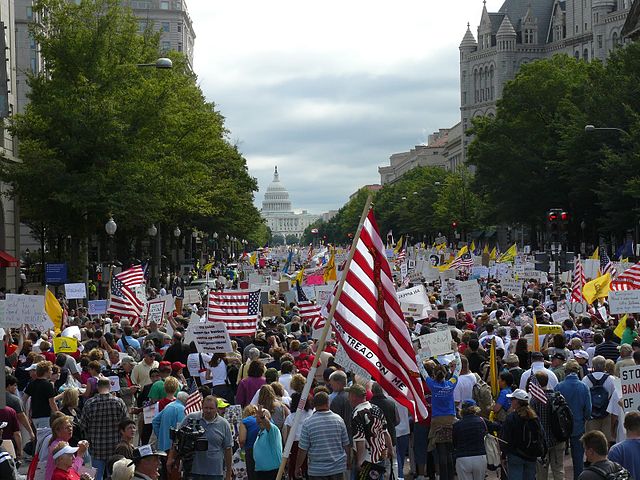 Tea Party protesters walk towards the United States Capitol during the Taxpayer March on Washington, September 12, 2009. Via Wikipedia.

Fascism was inherently irrational, a rejection of Enlightenment ideals, and profoundly anti-intellectual. This irrationality (which Mosse connects, in the case of German National Socialism, to Europe’s late-nineteenth-century embrace of Romanticism), was long ignored by historians as “too outré to be taken seriously.” Yet as Mosse shows, irrationality served an important function in the workings of the party and the ideology. It provided a means for followers to resolve “a very real dilemma: after 1918 the society in which they lived did not seem to function well or even to function at all.” Fascism made an idealist promise to somehow transcend the social instability of the time. The details were purposely left vague, conveniently discouraging adherents from looking too closely at the movement’s methods.

It is intriguing to consider fascism’s use of irrationality in light of modern calls to “Take back America” by processes that range from the improbable (repealing a broadly popular national healthcare policy) to the ludicrous (forcing Mexico to pay for a border wall). A sizeable percentage of America’s electorate, aware that today’s globalized economy does not function well—at least not for them—seems quite willing to suspend rationality and believe such promises. Fortunately, there is scant evidence that today’s promise-makers have either the means or the aptitude to make anything more than symbolic gestures toward fulfilling their promises. 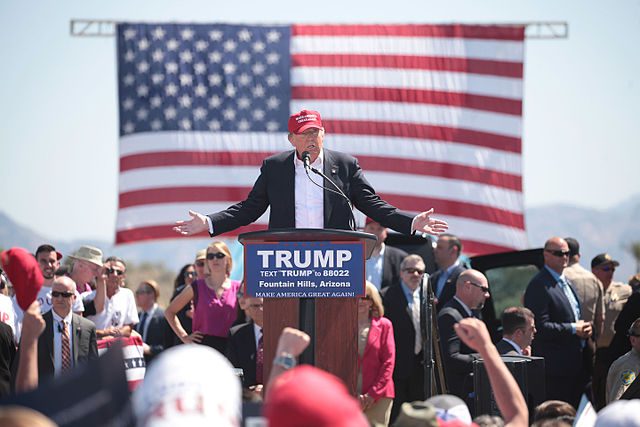 Trump speaks at an Arizona rally in March 2016. Via wikipedia.

Fascism was also, Mosse notes, explicitly revolutionary; an activist doctrine that focused its energy on destroying the existing order and replacing it with something new (though in Germany’s case, the future would be informed by the past). In this way, fascism stood in opposition to conservatism, an arrangement that also resonates strongly with today’s headlines. Witness the consternation of today’s GOP officials, who have lost control of their nomination process and seem to no longer even understand the anger of their own base. But while twentieth-century fascists made devastating use of the revolutionary energy they generated, modern conservative politicians appear caught off guard by voters’ revolutionary zeal, their willingness to destroy institutions in order to bring about the change they perceive as vital to national survival. It is somehow comforting to realize that our politicians are markedly less competent than the fascists in this regard.

And there are other important differences between our era and that, which gave rise to European fascism. Though economic uncertainty is again a factor in our politics, the intense anxiety over “respectability” Mosse identifies as a breeding ground for fascism’s moral code is largely absent today; we are, perhaps, simply more relaxed now. The mistrust of cultural pluralism undergirding today’s pro-nationalist arguments is partly a response to demographic trends that make it all but impossible for those concerns to become mainstream. Our understanding of “nation” has shifted, becoming more diverse. And while the fascist obsession with sexuality, and control of it, has its echoes now, recent attempts to criminalize abortion, birth control, and gender non-conformity have failed at the national level and are likely to be rolled back in the states where they have found purchase. Supporters of such policies are part of a smaller, and shrinking, population.

Still, there are enough eerie similarities in Mosse’s essays to make them rewarding reading for anyone curious about the growth and spread of destructive ideologies—including those presently in circulation.

Cali Slair on Hannah Arendt’s The Origins of Totalitarianism

Charles Stewart talks about Foucault on Power, Bodies, and Discipline